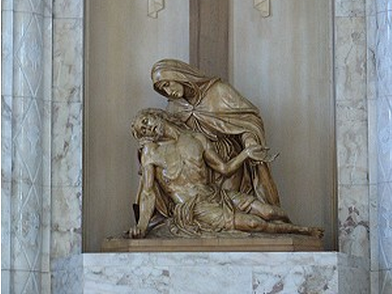 The mission of the Servants of Mary is to manifest God's compassionate presence in the spirit of Mary. We respond to the words of Jesus: "Be compassionate as your God is compassionate." We do so by following the example of Jesus, under the guidance of Mary.

Our commitment to compassion calls us to:

Servants of Mary Past and Present

Our Order, the Servants of Mary (also known as the Servites),  has a rich history beginning in 1864 with a young French woman by the name of Marie Guyot.  Marie, along with a small group of friends began a school in Cuves, France, a small village three hours east of Paris.

In the late 1840s this group of teachers became a religious community known as the Sisters of Calvary.  More women joined this small community and the school continued to grow and became a boarding school.  Due to political unrest, in 1852  the Sisters moved to England where they served as missionaries, working with and teaching the very poor. The Sisters were impoverished and took in sewing and laundry to support the Community and their ministry in the streets of London.  The Community continued to grow, and a strong foundation was established in London under the leadership of Sister Philomena Juliana Morel. The Community’s title changed, and they became known as the Sisters of Compassion.  Throughout our history, we have had several names, all which connect to the compassion of Mary.

It was in 1864 that the Sisters of Compassion joined the Servite Order, with whom they found a connection in both spirituality and mission, inspired by the compassion of Mary, the Mother of God.  It was at this time that the Sisters made their final name change to the Congregation of the Servants of Mary of London/Cuves.  The title representing a connection to the Servite Order and honoring our history – the original foundation in Cuves, Frances and their missionary work in London, where they met the Servite Order.

The Servite Order began in 1233 by seven Florentine nobles and businessmen who served the poor in the streets of Florence.  Later the Order built a monastery on Monte Senario, outside of Florence, Italy where they were able to live in contemplative prayer, community and service dedicated to Mary, Mother of Sorrows. The Order that began as friars, is now worldwide and composed of many different autonomous congregations of sisters, active and contemplative, third order and associate members. Each congregation follows its own constitution (rule of life) but all share the same Servite spirituality.

In 1871 the Sisters, now known as the Servants of Mary, expanded their missionary work to the United States.  In 1892 the Sisters opened their first Motherhouse in St. Matthew’s Parish in Mount Vernon, Indiana.  Today, over 125 years later, the parish school still remains open.  The Sisters continued to move westward at the invitation of bishops and priests in other dioceses.  Led by their mission spirit the Sisters went on to establish foundations in Illinois and Iowa.

Because of continued growth additional space was needed.  In 1955 a new addition to the Motherhouse was built that more than doubled the size of Sisters’ home.  This expansion also included Marian High School, a school for young women dedicated to Mary.  As the Servants of Mary, we continue to pass on our values, history and traditions through sponsorship of Marian and the variety of ministries in which we serve.

The Congregation of the Servants of Mary London/Cuves has remained an international Congregation with Sisters now in nine countries:  France, the UK, Belgium, Austria, Canada, the US, Jamaica and the Democratic Republic of Congo.  Many of these countries have lay Associate Programs.  The Congregation is led by a Congregational Prioress, an Assistant and two councilors.  Today this international leadership team has members from France, the US, Canada and the UK.  These sisters are responsible for overseeing the spiritual, community, and ministerial needs of the Sisters and Associates.

2020- Celebrated the 175th Anniversary of the Congregation of the Servants of Mary/London Cuves.

2006- Renovations of the Motherhouse and Chapel, Omaha, Nebraska

1983- The Grotto- Santuary of Our Sorrowful Mother, Portland Oregon

1967- Our Lady of the Assumption, Fairview Heights, Illinois